Modern day floods in the UK seem to be mostly occurring and publicised from inland areas such as the Somerset Levels or from river flood plain land after heavy rain. Rarely do we see coastal towns flooded despite the TV images of huge waves battering Blackpool promenade when a storm hits us.

This was not always the case as my own Cumbrian village of Haverigg was flooded twice a year from regular Spring Tides throughout my childhood. Sea water is quite horrendous if it gets into your home with the salt, sand, seaweed and various marine life rotting and scouring everything it touches. Yet despite this there was camaraderie and humour, it was just another part of our lives from one season to another; December/January brought snow, March and October brought floods, so let’s help each other dig out our streets, pile up the sandbags, sweep up the mess. We could also fall apart laughing as locals from a nearby town came to ogle at our misfortune but get a soaking as they misread the flow of the tide and a dip in the street causing a “bike trap”!

The house I lived in until the age of 19 was about 25 metres from the river that met the sea, which was about another 25 metres beyond that at high tide. There was no protection from a river overflowing from the influx of the sea, and no sea wall or barrier either from the sea itself. Some houses and fishermen’s cottages were even closer and if there was a following wind they took an absolute battering!

Norman Nicholson captured the essence of this in Provincial Pleasures, a wonderfully written book from a bygone age, almost as if he has written about my whole childhood in the 1950’s.

The news tom toms around the village; Ma Bosanco has had it in, bloody great crabs as big as tortoises walking around her kitchen, she won’t come downstairs till we’d thrown her a pair of clogs up to the bedroom window

Here old Sam Burrows caught a fluke in the parlour and Bill Salt, the fisherman, dug his bait off the front room oilcloth.

The highest swells are lifting over the rise by the chapel and trickling into Harbour Square. Give it another six inches and two thirds of the village will be flooded in no time! But already the tide is on the turn. The houses stand ugly and as unconcerned as ever, their feet in a tide-mark of slop and wrack and rubbish.

Much more than his poems, Norman’s prose revives memories with such intensity and accuracy. How can “bloody great crabs as big as tortoises” fail to create an image in your mind so sharp if you were actually there to see it? And I was there, but fatefully in the Spring of 1968 our house was flooded for the last time, my mother could stand it no longer and moved a mile inland. What I lost was a single photograph, the memory of which has plagued me for 50 years, but I will tell you of that in another post.

3 thoughts on ““Bloody great crabs as big as tortoises”” 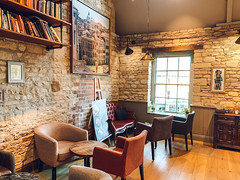 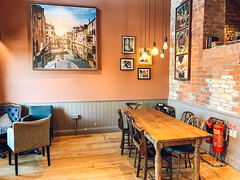